Henry Welfare, known commonly as Harry, was a Liverpool born striker who went on to score 163 goals in 166 games for Fluminense of Rio de Janeiro, Brazil.  From what we know of his story there is a sense that he was a wandering football nomad who played the game by mixing amateur ethics with the hard work of a professional.  Here we look at how he ended up being a Flu club legend, rather than a Liverpool one.

Welfare played for numerous clubs in the North West of England including St Helens Recreation, Sandown, Hoylake, Northern Nomads, and Liverpool.  He probably played for far more teams than is documented, as he seemed to be willing to turn out for any local team who fancied giving him a game, and given his talents many would be willing to do so.  Some records state that he also played for Tranmere Rovers, Southport Central, and Wrexham.

At Sandown, Welfare was made player secretary by the club, and he always returned to this club in between playing for the more renowned and higher profile Northern Nomads.  The Nomads were another club who suited Welfare’s amateur outlook on the game, and they could be regarded as the northern equivalent of London’s Corinthians club.  Unlike the amateurs from down south, the Nomads would not limit themselves to playing against only amateur teams, and their matches against professional teams in the area may have been where Welfare was first noticed by Liverpool, especially as some of their games were played at Prenton Park in Birkenhead.  In the 1911/12 “season” (the Nomads only played friendlies) he scored 35 goals for the Nomads and this seemed to have been enough for Liverpool to want to take a closer look at the centre forward.

He made several appearances for Liverpool Reserves before eventually being promoted to the first team, and during this time he still made appearances for Northern Nomads, and maybe other amateur matches we (and Liverpool) don’t know about!  Liverpool realised that his performances in the reserves showed that he could easily adapt to a higher level, and his standout performances earned him a first team place.

His time at Liverpool brought mixed success, but the fans had taken to the hard working striker even after only four appearances.  Officials involved with the management of the club during this time obviously thought very highly of him, as is evident in the lucrative contract offer he received in an attempt to persuade him to stay on Merseyside and play full time for Liverpool in the First Division.  Fans and club officials thought that if he could dedicate himself full time to the club he could become one of their best players, but Welfare enjoyed the freedom his amateur status brought him too much to commit himself to one club on professional terms.  And he had a job or two lined up in Brazil...

His reluctance to play professionally may have played a part in him eventually joining Flumenense, as he was offered generous professional terms to play full time for Liverpool, but turned them down.  He went to Rio to teach at the Ginásio Anglo-Brasileiro not long after this offer - many of the so called gentleman amateurs of the time will no doubt have been persuaded to stay by the wages on offer in Liverpool.

There is an article on the Fluminense website which describes Welfare as the British Tricolour, and refers to him as “o gigante ruivo-grisalho” – the giant red-grey – when recalling the striker’s goal record and contribution to the clubs success.  Their debt to him is evident when the same article mentions that his goals helped make the club a power in football, and that he is still thought of so highly today shows the impact he had on the club. 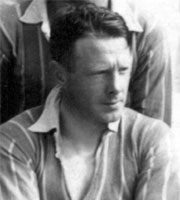 The nomadic striker seems to have found his home, at least in football terms, at Fluminense, but some unconfirmed records state that he also played for Flamengo and even Corinthians.  Although an appearance for Flamengo could have been likely given that they are also based in Rio, it seems doubtful that he would have played for Corinthians who are based in Sao Paulo.  He did however score against the touring English Corinthains side whilst playing for an unofficial Rio de Janeiro team in 1913.

It is also known that an Exeter City team visited Rio as part of a South American tour in 1914.  They played against an early Brazilian national side made up of players from Rio and Sao Paulo teams, as well as playing in a match against English ex-pats.  Both games are said to have been played at Fluminense’s Estádio das Laranjeiras.  You wouldn’t bet against Welfare having played in one of these matches for either team, or maybe he was away playing for some little known local college side.